I have been a Clinton supporter since 1991 when I met Ira Magaziner.

I thought and still think that HRC would make an excellent POTUS.

But she royally screwed up her campaign.

There were issues with the ground game.

Which led to Clinton losing the Rust Belt.

And it was no secret that a lot of voters were pissed and scared.

I'm going to focus on HRC's web site because it's emblematic of the larger issue of the campaign not marketing Clinton.

People have very limited time and attention. Over the years, there's been a lot of research into how to present information so that people can consume it.

It's also important to have a core message that everybody can repeat verbatim: the Elevator Pitch.

Hillary had no elevator pitch. Let's see how hard we have to work to actually find out what Hillary stood for.

First, let's go to the front page of her website: 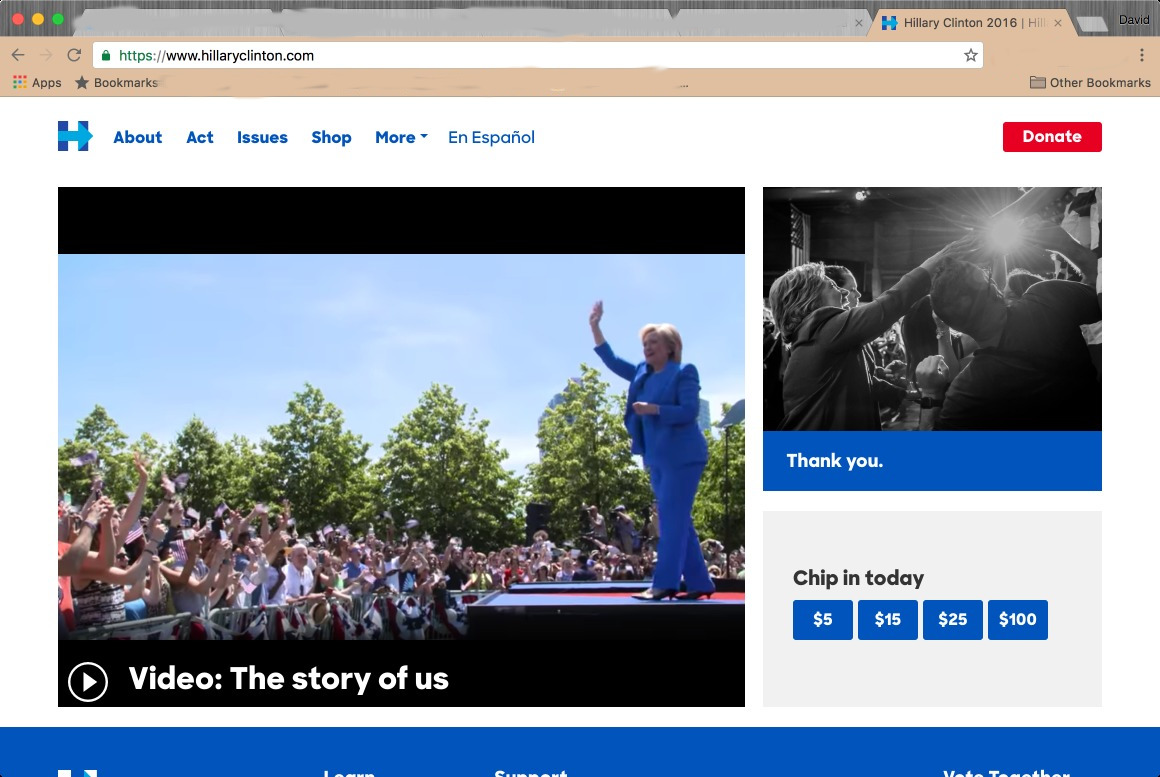 There's no call to action other than "Chip in today."

There's no explicit request to "Vote for Hillary." Asking for the vote is part of Democratic lore.

Okay... so where can we find out what Hillary stands for. In the middle of the top row is the "Issues" link. This is the WORST place for a link! The thing in the middle is the last thing the human eye sees.

The eye should be drawn to important things! 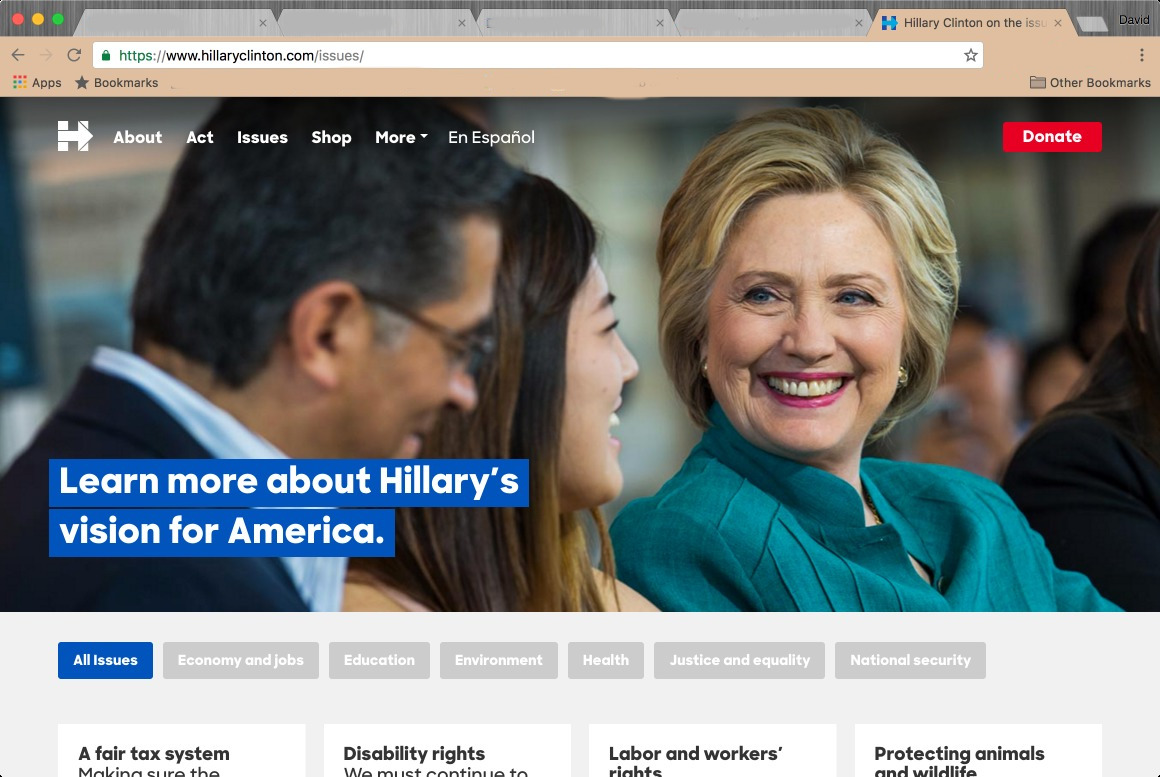 The actual issues are buried below the fold. Note, I took these screen shots on a machine with a 1280x1024 screen. The kind of screen you could expect a regular voter to have.

Except the issue on the right that's kinda peeking above the fold is "Protecting animals and wildlife."

This is absolute stupidity. The human eye goes to the item on the right. The top right position is the one where the eye goes to first. This is the most important issue.

If HRC thinks "Protecting animals and wildlife" is the most important thing to voters, she deserved to lose.

We need one of the key Maslov's Hierarchy issues here: Jobs, Security, or Taxes.

Okay... so let's scroll down the page to find out what HRC's position on rust belt issues were. 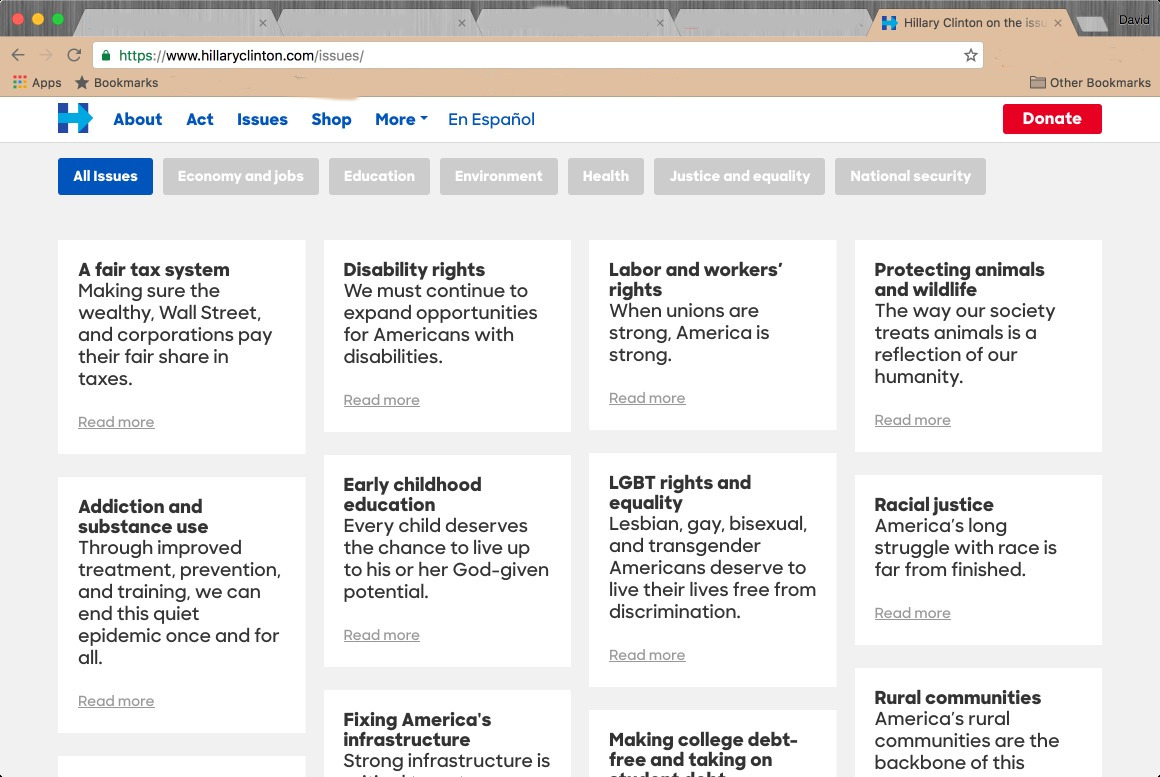 Okay... "Labor and worker's rights"... that's a lame but passable way of saying "Protecting your Job!"... but it would be better to focus on the benefit to the voter.

"What are these Rights you Speak of?" 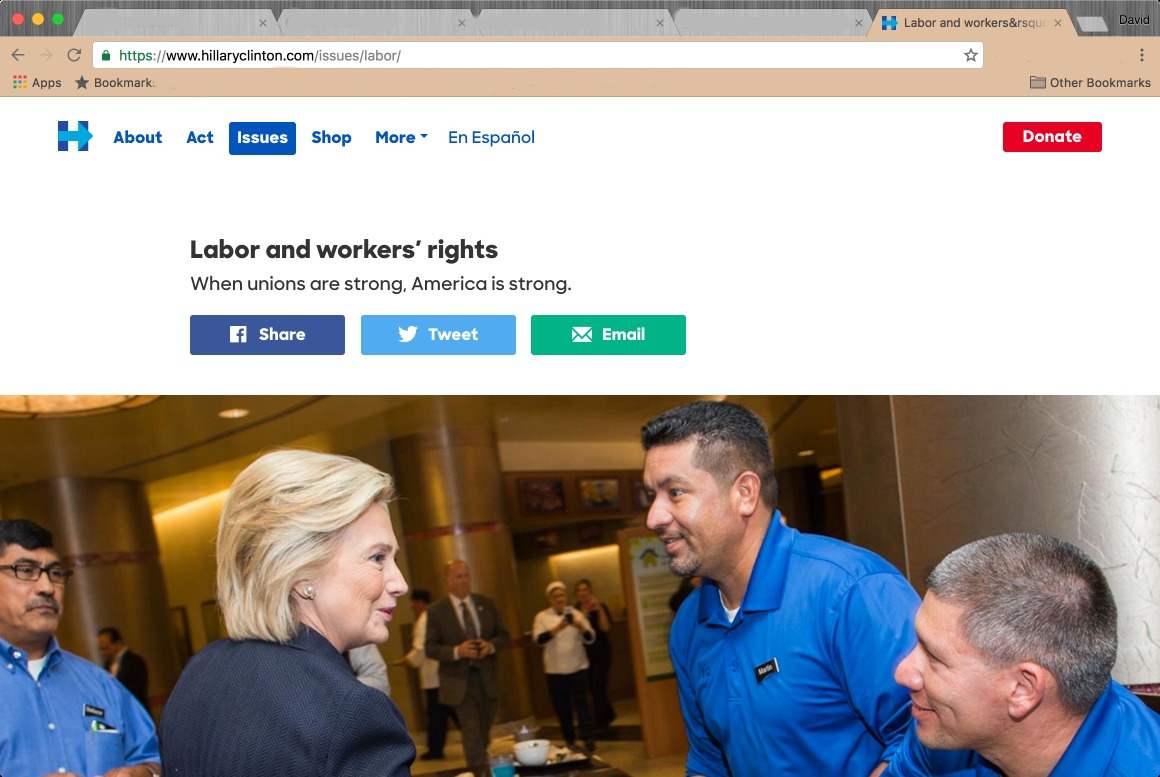 "Let's scroll down a bit" 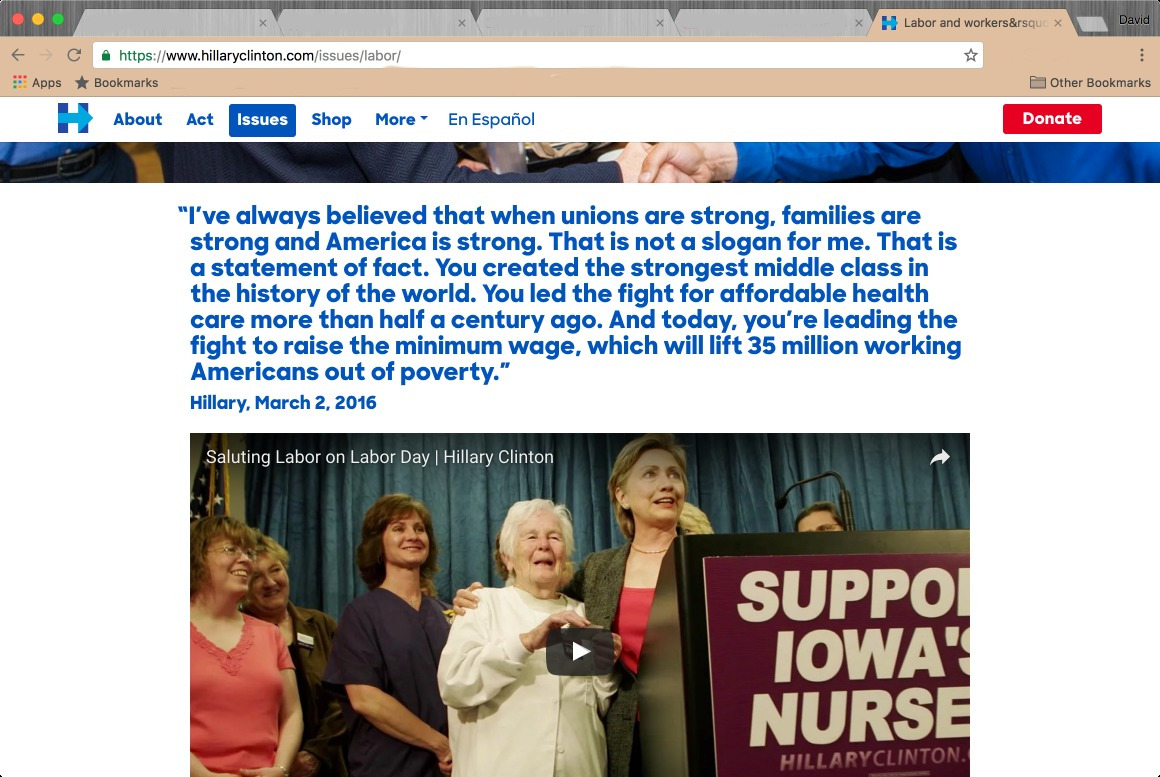 Okay some words. A very long paragraph. Not a "I feel your pain" kinda paragraph, but an elite, patriarchal blob of stuff that you have to read ALL. THE. WAY. TO. THE. END. to get to the benefit: "raise minimum wage."

"Okay, but what are the 'Features' and 'Benefits'?" 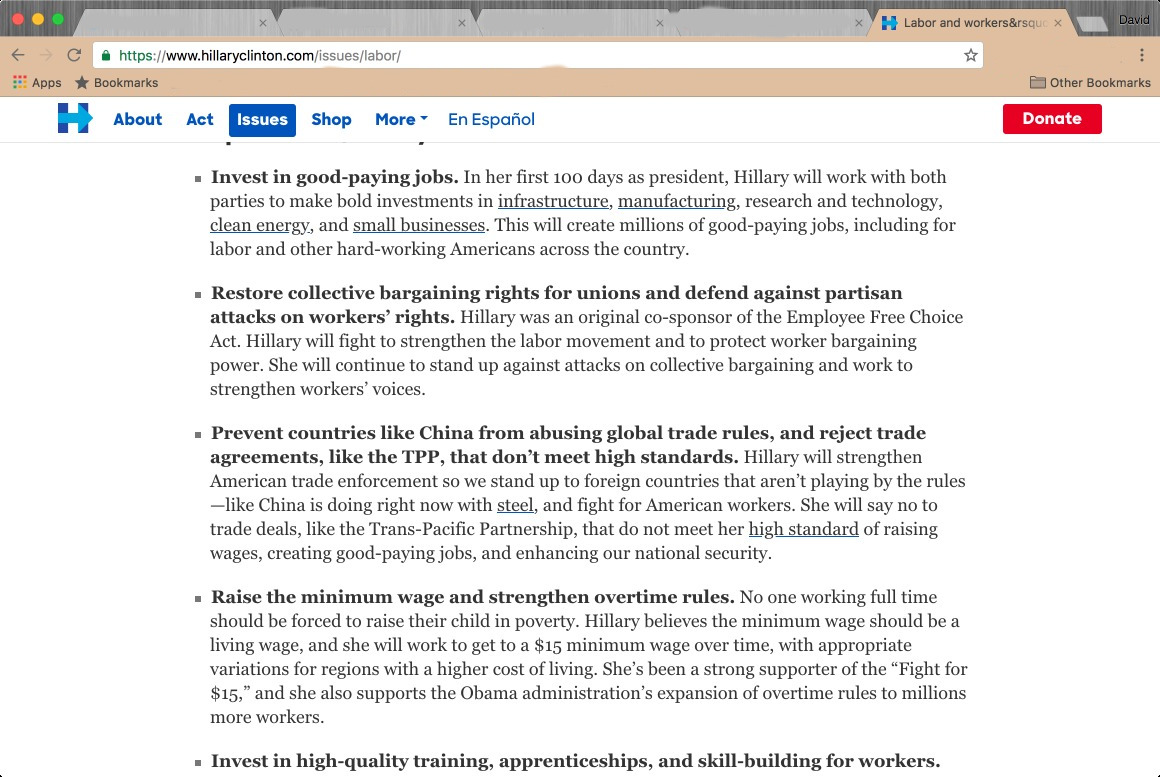 Welp... not really the traditional features/benefits or programs/benefits language. It's a but of stuff that you have to read all the way through to make sense of how it impacts the reader.

Take the first bullet point. Wouldn't have been better to say:

I could continue, but you get it.

It took 6, 6, 6 actions to get to the heart of what HRC was going to do for a rust belt worker. Very, very few people care enough to dig this deep.

This was a failure to market.

Yes, HRC supported most of the stuff that liberals and rust belt union and child of union laborers wanted.

But you know what? The Clinton campaign completely and utterly failed to communicate these items to the voters.

The Clinton campaign failed to connect with the voters on the ground.

The Clinton campaign took what should have been a cake walk and completely botched it.

But Clinton ran shit for a campaign. Clinton did not market herself.

And sadly for most of the US, she lost.

Put a file in /templates-hidden/include.html to update the page